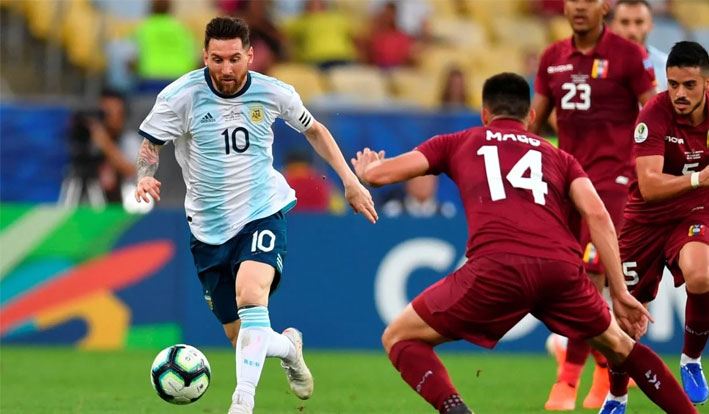 Soccer News and Betting Previews| Xbet.ag
Peru continued their amazing run through CONMEBOL’s Copa America on Wednesday, rolling over defending champion Chile by a 3-0 score. Edison Flores opened the scoring in the 21st minute, and then Yoshimar Yotun added an insurance goal in the 38th minute. Paolo Guerrero added insult to injury with a goal in stoppage time at the end of the second half, and now Peru has a date with Brazil for the title. Considering the statistics, this game is surely an anomaly, as Chile led in shots, 19-9 (7-3 on target) and possessed for 66 percent of the game. They made almost twice as many passes as Peru and completed 81 percent of them, and with their pressure they forced nine corners — but Peru posted the clean sheet. Now Chile will take on Argentina for third place, as Brazil eliminated Argentina in the other semifinal. In that game, Gabriel Jesus scored in the 19th minute, and Roberto Firmino added insurance in the 71st minute to finish off the scoring. Brazil only launched four shots, with three on target, while Argentina took 14, putting two on net. Possession was virtually even, with Argentina possessing 51 percent of the game, and the passes (422-419 for Brazil) and the accuracy (85%-84% for Argentina) was dead even as well — but the score was clearly for Brazil. Lionel Messi complained about the officiating after the game, but it is in the books, and now Chile and Argentina will take the pitch for third place on Saturday. Don’t miss our sports betting preview of this matchup.

Why should you bet on Argentina?

This side looked like the collective wind was out of their sails walking off the pitch after losing to Brazil. The truth is that Argentina has not gotten much out of Messi, Aguero or Di Maria in this tournament. They barely made it out of group play, failing to defeat Paraguay and Colombia. Many of their 14 shots against Brazil came from distance, with little chance of posing a real threat. If you like Argentina, you see them getting their heads on straight and delivering in the third-place game. I’m not sure I see this game headed that way, despite their clear talent edge over Chile.

Why should you put your money on Chile?

Despite coming in as the defending champion, Chile did not have a lot of expectations coming into this tournament due to a drop in talent on their national roster. However, Alexis Sanchez has played well overall in the tournament (although he did not contribute much in the loss to Chile). They did deliver a big win over Colombia in the quarterfinals after playing decently in their group. If you like Chile, you see them coming in somewhat mentally tougher than Argentina. After all, Chile did not expect to win, while Argentina is still looking for its first major trophy with Lionel Messi on the team, and Argentina still has never beaten Brazil in Brazil, a stretch that continues to rile the players and fans. I like Chile coming in and delivering against an Argentinian team that may still feel like they should have beaten Brazil and will have a bit of a letdown in this third-place match.

I see Chile coming out and delivering a win here against a dispirited Argentinian side — after all, who remembers who won the third-place game? Chile did not really have its sights on the tournament championship, while Argentina is always disappointed if they do not get the big trophy. I’m taking Chile to win 2-1, especially given the value in that moneyline.
Older post
Newer post