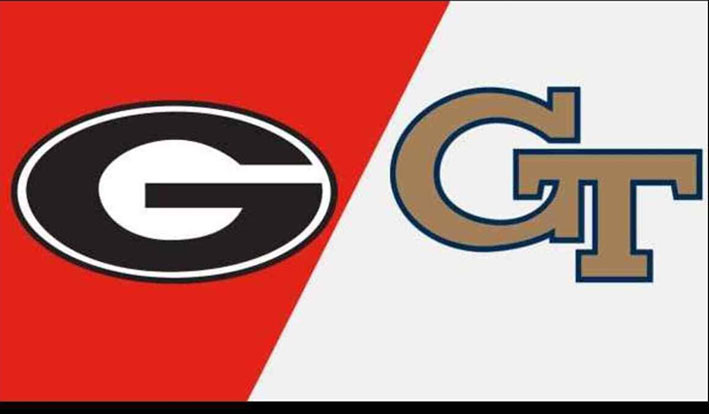 NCAAF News and Betting Previews| Xbet.ag
“The Clean, Old-Fashioned Hate” is the rivalry between the University of Georgia and Georgia Tech University, which dates all the way back to November 4, 1893, when Georgia Tech defeated Georgia, 28-6. The teams have played 113 times overall, with Georgia winning 67, Georgia Tech winning 41 and five games ending in ties. The series was fairly even until the arrival of Vince Dooley to coach the Bulldogs, but Georgia Tech has won two of the last five. Last year, Georgia (then ranked fifth) routed the Yellow Jackets, 45-21, and expectations are similar this year as Georgia Tech is going through a coaching transition. However, rivalry games, particularly in college, can have unexpected outcomes — remember, Georgia has lost at home to South Carolina this season. Can the Yellow Jackets pull off the upset? Or will Georgia take care of business on the road? We have your sports betting preview right here.

Why should you bet on the Bulldogs?

Since that loss to South Carolina, Georgia has taken care of business, which is why they currently hold the fourth-place slot in the College Football Playoff standings. They beat Kentucky, Florida, Missouri, Auburn and Texas A&M to move to 10-1, and they have already clinched a spot in the SEC Championship (Georgia Tech is in the ACC, making this a non-conference game). You might think that Georgia would overlook this game, but rivalry games like this never get overlooked, although the underdog can deliver some surprises. Quarterback Jake Fromm has been a solid game manager for the Bulldogs, with just three interceptions on the season, averaging 7.5 yards per attempt. The O-line has been stout for him, as he has been sacked less than one time per game, and tailback D’Andre Swift is well over 1,000 rushing yards for the season. The defense leads the nation in fewest points permitted per game, at 10.1. If you like the Bulldogs, you see them putting the hammer down in order to impress the College Football Playoff committee and keep that fourth slot, or perhaps even move up if Clemson struggles to put away South Carolina.

Why should you put your money on the Yellow Jackets?

Geoff Collins has had a difficult season in his first year coaching the “Ramblin’ Wreck.” That means that the Yellow Jackets no longer run the triple option, but Collins inherited a roster with 13 running backs and zero tight ends (because you don’t use tight ends in the option). Georgia Tech has a 3-8 record so far, with wins over North Carolina State, Miami (FL) and South Florida. However, Temple held Georgia Tech to just two points, and Virginia Tech blanked them. Over the last two years, Georgia has beaten the Yellow Jackets by a combined score of 83-28. So why would you bet on the Yellow Jackets here? Remember that the line is 28 points, which means that if you bet on Georgia Tech, you’re just betting on them staying within four scores. Georgia has only beaten two FBS teams by 28 points or more this season: Tennessee (29) and Arkansas State (55). Georgia Tech has only lost by 28 or more points to Virginia Tech (45) and Clemson (38). I would not be surprised to see Georgia put the game out of reach by halftime and then put reserves in…by which time the Yellow Jackets could get a backdoor cover.

I see Georgia taking Georgia Tech to the woodshed in this game. I might consider the Yellow Jackets for the backdoor cover, but then I look at that 45-0 shellacking they took from Virginia Tech. I see the Bulldogs keeping the gas pedal down and rolling, 41-9.
Older post
Newer post