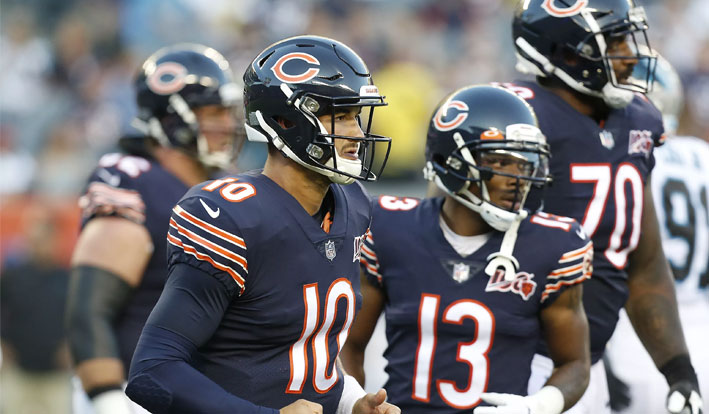 Week 13 finally brought an end to the winless 2019 campaign for the Cincinnati Bengals, as they played one of the most confusing teams in the NFL: the New York Jets. This is a team that has beaten the Dallas Cowboys (although we are seeing that this is not really all that difficult, despite Jerry Jones’ ongoing belief that his team is a Super Bowl contender) and embarrassed the Oakland Raiders. Against a winless Bengals team, though, the Jets only scored six points, even though every other team that had played Cincinnati had put up at least 16. The Jets did not even make it into the red zone against Cincinnati, let alone the end zone. This means that the Jets became the first team in NFL history to lose games to two different teams with records of 0-7 or worse in the same season. What can we expect in the NFL Week 14 odds? Don’t miss our sports betting preview for this week’s action.

A new @TheMMQB NFL Power Rankings, fresh off the press 🔥 There’s minimal movement up top, but a new team in the bottom spot https://t.co/Hn2j3pPpgv

I’m not sure how Dallas is favored in this game. They just got embarrassed at home by the Buffalo Bills — and the Bills’ defense is not any better than the Bears’ defense. The Cowboys refuse to make any leadership changes. So expect another grinding game where Dallas has a solid drive early to score and then relaxes…and then loses. Chicago to cover.

Which Falcons team will show up? More than likely it will be the one that has lost nine games, as the team that has won three did not come to Thanksgiving dinner. Panthers to cover.

Could this be a trap game after Baltimore gutted out a huge win over San Francisco? Buffalo went to Dallas and won by eight. The Ravens have a much, much more consistent offense than Dallas, but I see the Bills making the Ravens fight for a late win. Bills to cover.

Andy Dalton returned to the starting lineup for the Bengals and set the franchise record for passing touchdowns against the Jets. Cleveland went to Pittsburgh, ran out to a 10-0 lead…and then gave up 20 unanswered points to third-string quarterback Devlin Hodges (who might be the best third-stringer in the NFL). Even so, Cleveland to win and cover.

The Packers delivered a 31-13 thumping of the Giants in New York last week, as Aaron Rodgers threw for 243 yards. The Redskins are slightly worse than the Giants, in my estimation (despite getting 129 yards from Derrius Guice in that wacky win over Carolina). So at Lambeau? Packers to win and cover.

I would verify Detroit’s quarterback situation before I put down a bunch of money on this game. Both Jeff Driskel and David Blough showed in their work so far that they can move the ball, and did you see how many points Minnesota just allowed Seattle? That’s 37. Detroit to cover.

The 49ers’ defense has been tremendous this season. Yes, they just lost in the rain to Baltimore, but that was an early game in the Eastern time zone in dreadful conditions. I’m not sure the New Orleans offense is as good as Baltimore’s. San Francisco to cover.

It seems like this is the Jets’ week to play well, but Miami just pulled off a mammoth comeback to beat the Philadelphia Eagles. I tend to stay away from a battle of inconsistent teams, but if you must choose, the Jets are having the better season overall. Jets to win and cover.

Tampa Bay is another wildly inconsistent team. Indianapolis was in the driver’s seat in the AFC South before taking that 14-point beating at home from Tennessee. I see Jameis Winston putting together another solid effort and delivering the win. Bucs to win and cover.

The Texans’ defense looked rock solid against New England on Sunday night (until that scary drive late in the fourth quarter). With a rookie quarterback coming to town for the Broncos, I like the Texans to feast. Houston to win and cover.

A quarterback duel between Philip Rivers and Nick Foles is not something I would want to watch. Somehow the Chargers lost to Denver last week despite having the game’s top passer, running back and wide receiver in terms of yardage. Why? They keep turning the ball over, and turnovers tend to favor a defensively strong team. Jaguars to cover.

Ryan Tannehill is playing the best football of his life. Derek Carr turns the ball over way too often. Titans to win and cover.

I expect New England to bounce back after losing to Houston last week. I also expect Bill Belichick, once again, to outfox Andy Reid down the stretch. Patriots to win and cover.

Will it be Devlin Hodges or Mason Rudolph for the Steelers? Yes, the Rams just demolished Arizona, but they were taking out some frustration from that annihilation they got from Baltimore the week before. I see Kyler Murray making the Steelers’ D look a little silly. Cardinals to cover.

If you make Jared Goff sweat in the pocket, he will throw interceptions to you. The Seahawks are solid at getting after the passer. After taking over the top seed in the NFC, I don’t see the Seahawks letting it slip away this week. Seahawks to win and cover.

Will the Eagles have some frustration to work out in prime time? Yes, yes they will — and then they will move back into a tie for the NFC East lead thanks to Dallas losing on Thursday. Eagles to win and cover.