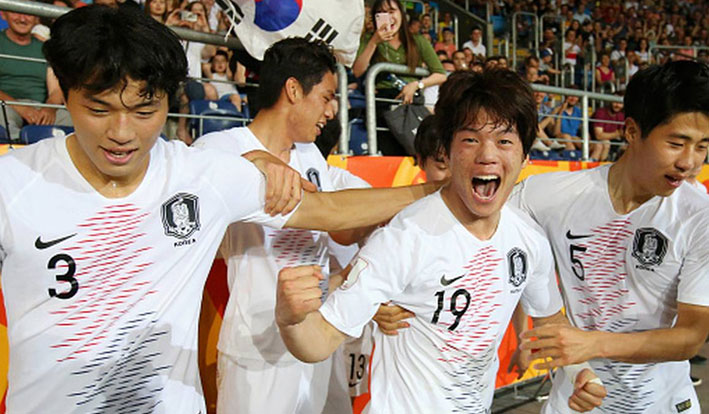 Soccer News and Betting Previews| Xbet.ag
Ukraine and South Korea both pulled off upsets in the semifinals of the FIFA Under-20 World Cup in Poland. Ukraine eked out Italy, 1-0, thanks to a goal from Serhiy Buletsa in the 65th minute, despite only possessing the ball for 38 percent of the game. They has lost Denys Popov for the final thanks to a late red card. Ukraine’s defense was stout, holding Italy to just one shot on target. Now comes South Korea, who also won 1-0 in their semifinal over Ecuador. South Korea only took two shots that went on target, but one of them, from Jun Choi in the 39th minute, found the back of the net. Like Ukraine, South Korea only possessed for 38 percent of the game but ended up winning. Who will hoist the trophy at the end of this match? Don’t miss our soccer betting preview of the FIFA Under-20 World Cup Final.

Why should you bet on Ukraine?

Ukraine rides in on a five-match unbeaten streak, with wins over Qatar, Panama, Colombia and Italy, and a 1-1 draw with Nigeria. They have only scored more than one goal once in this tournament, and that was in their 4-1 rout of Panama. In their other three wins, they have posted 1-0 clean sheets. That dominant defense will make the South Koreans work hard to break open a crack and find a way into the net. Watch Andriy Lunin in the final. He played with Ukraine’s senior national team in qualifiers for the UEFA European Championships and was not present when the U-20 team beat Colombia in the quarterfinals. However, he was a major part of the team’s win over Italy; he has permitted just three goals in five matches. If you like Ukraine, you see their advantage in speed breaking down a tactically disciplined South Korean side.

Why should you put your money on South Korea?

South Korea also comes in on a five-match unbeaten streak, with wins over Ecuador and Japan in group play (along with a draw against Senegal), and then wins over Argentina and South Africa in the knockout rounds to advance to the final. Lee Kangin has emerged as a terrific playmaker, but the real strength that the South Koreans bring is their organization. He plays for Valencia, and he delivered the assist on their lone goal against Ecuador. South Korea would be the first Asian men’s team to win a global final if they can emerge victorious here. The South Korean women’s team won the FIFA U-17 Women’s World Cup in 2010, taking down Japan in an all-Asian final. If you like South Korea here, you see patience and tactics taking over the game and Ukraine providing an opportunity on their back line for South Korea to exploit a weakness.

South Korea has the better tactical organization, but Ukraine has the edge on talent — and Ukraine has the best defense in this World Cup. I predict that Ukraine will hoist the trophy at the end, winning 1-0.
Older post
Newer post